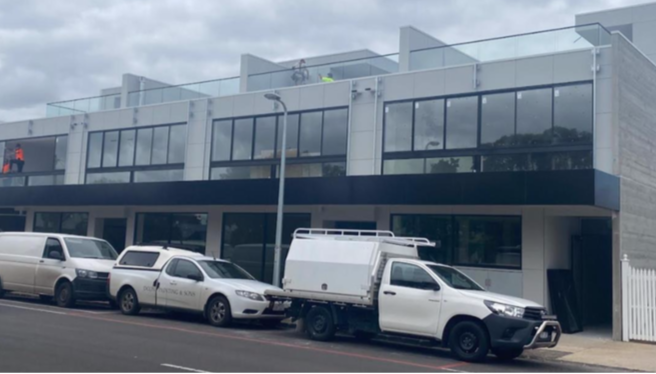 A developers extreme departure from originally endorsed plans omits wooden facade in favour of black aluminium, cement and fake grass to create a building more suited to a city office block than a seaside town.

The image below is the promoted facade which includes wooden battens and posts endorsed in the original plans. 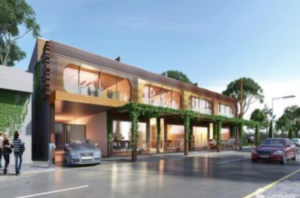 The Barwon Heads Association is very concerned by the almost-complete development at 66-68 Hitchcock Avenue Barwon Heads to provide for 4 retail shops on the ground level and 8 residential apartments on the upper level plus a rooftop terrace on the third level.

Our small community is devastated that the cement and black aluminium facade is an extreme departure from the original approved plans, secretly achieved through a series of Secondary Consent applications that council has approved after giving insufficient consideration and weight to the Barwon Heads Design and Development Overlay (DDO 25).

This development was approved under PP 178 – 2017 and, for several years now, has been widely promoted to have a timber facade both at the top and ground levels which face Hitchcock Ave. The top- level facade was to have timber battens and the ground level facade was also to be clad in timber. There were also originally timber columns at the front facade which were to have planting/greenery growing across them. These features were included in endorsed plans under PP 178 – 2017. An artist’s impression of the development’s facade, featuring the timber finishes, is still currently being marketed on the various websites for the residential apartments and retail tenancies. The image has also been displayed at the development site for the past few years and was only removed a few weeks ago when the construction fence was taken down. An extract of the images is below: